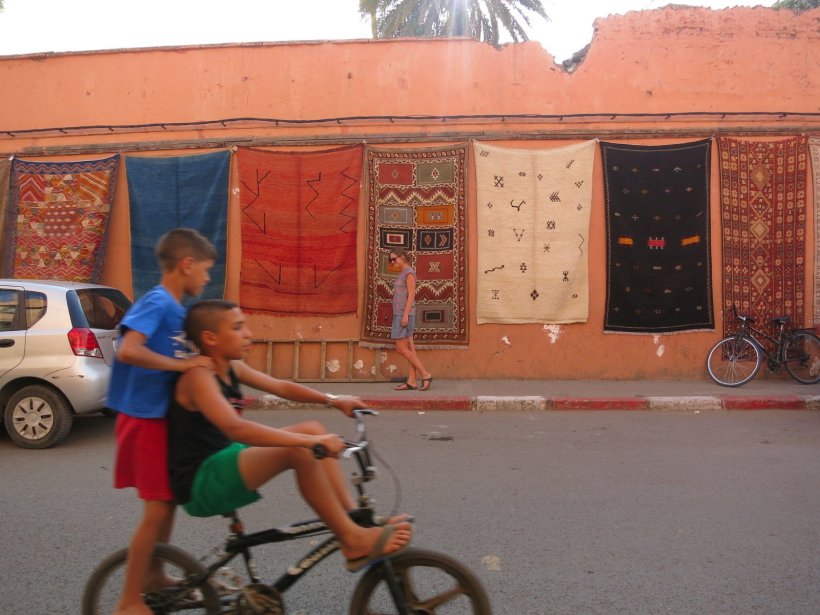 Our journey to Morocco is particularly special to us. Unlike other trips, were we tend to reflect after the event – this time we kept a daily journal and were able to reflect as events were unfolding. The reason for this was because my mum (Susan) was due to join us for the trip and at the last minute wasn’t able to travel due to dad’s declining health. It was our way of including her in our journey, with special focus on the moments she would have loved. Joel and I took in in turns writing at the end of each day on a scrappy old children’s workbook we found in one of the villages. Later on we added pictures and presented it to mum who laughed and cried her way through the pages.

Here is the plight of our day in Marrakech. I will start the journey from arriving at our Riad. We were treated to a delectable breakfast, served on the roof terrace, which allowed for a 360 degree view of the stalks nesting upon neighbouring T.V antennas. The sun was waking up, and with it, came its heated venom. The sun also awoke the megaphone ‘yala’ singers and the first call to prayer blared out over the sleepy city. Our breakfast was fastidiously cleared using a 10point methodical plan by Julian and we set about tackling the minefield of Marrakech. 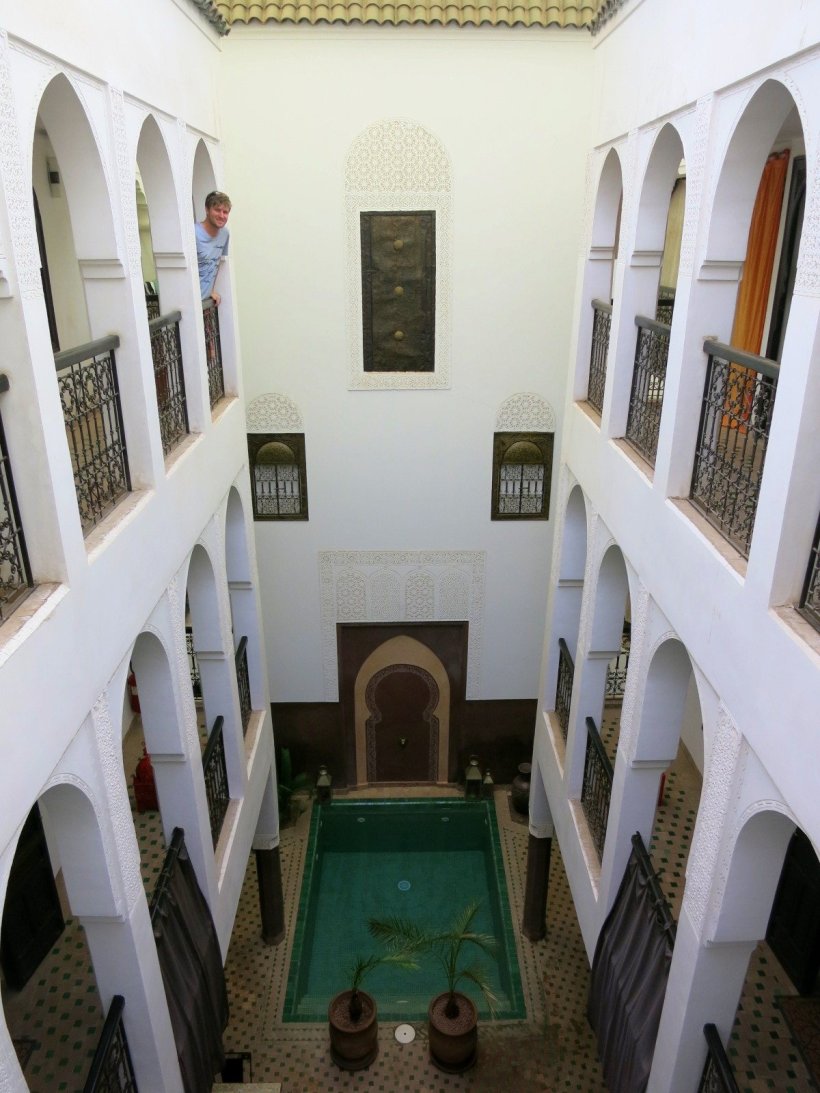 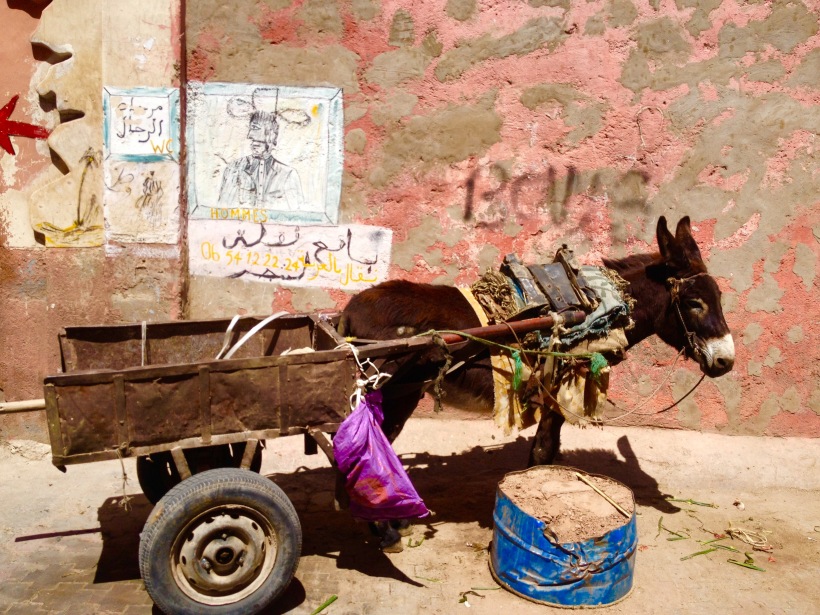 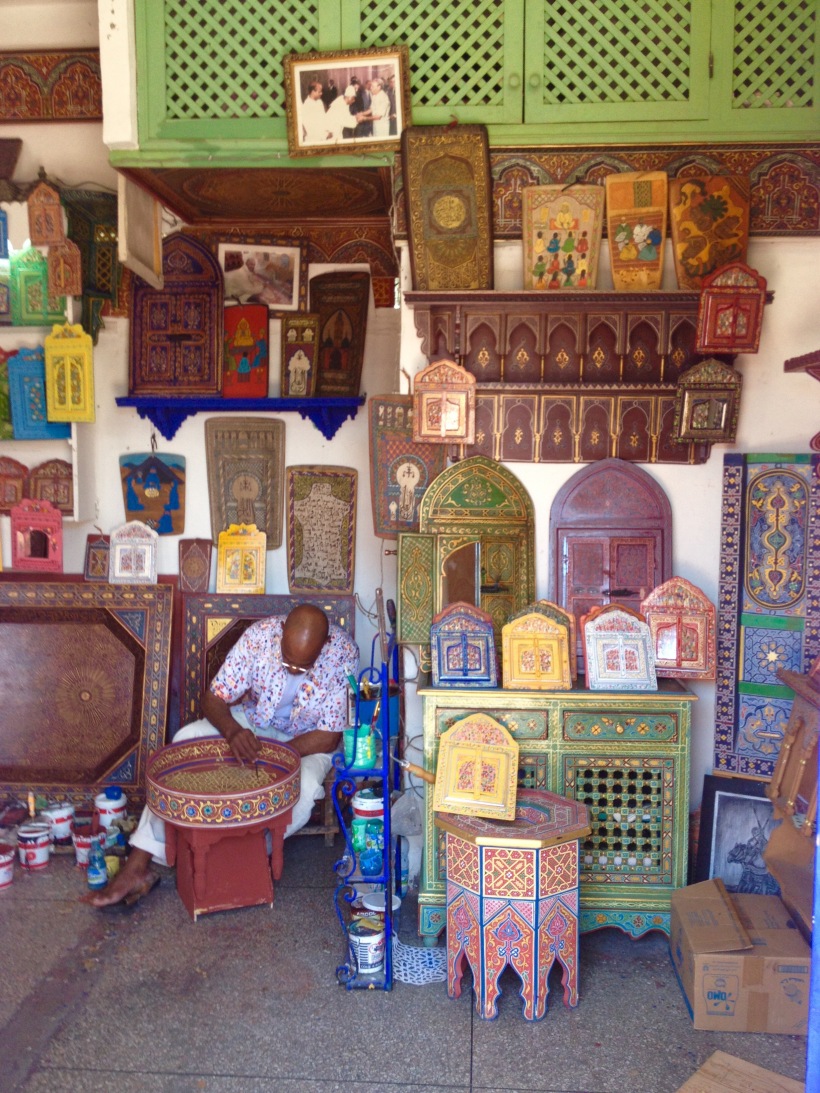 ‘Saffron’ is a word cast out from every spice shop you walk past as a limp attempt to hook in the floundering tourist. However, our local tip (again Julian) ruled supreme and we went to a secret organic spice shop away from the tourist bear traps. Saffron we did seek and saffron we did receive. With the sought after ruby strands in our back pocket, we set out for the main square. Unlike other destinations around the world, this main square had no such order established; it was complete an utter mayhem. Everywhere you looked there was something to be bought or sold or eaten. The classic ‘snake charmers’ and monkey wranglers were in aggressive form casting a snake or monkey around the stagnant tourist who ‘got to close’ or who chose the wrong spot to take a look at their map. If you were lucky enough to escape these more aggressive performers, you may have found your way into ‘orange juice alley’ whereby you would be shouted at from every direction and promises would be thrust your way as to why their stand was better than the other 20 orange juice stands. It must be said that this orange juice, once sampled, was like the nectar or the gods; simply delicious. 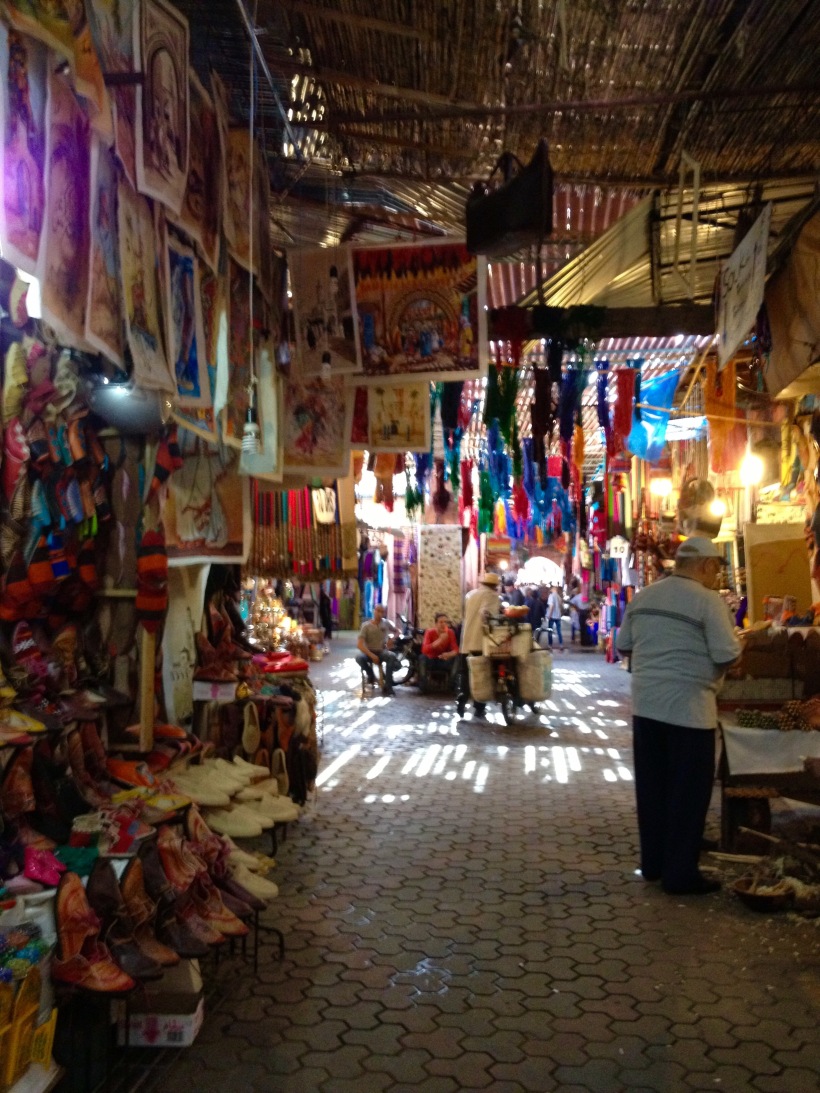 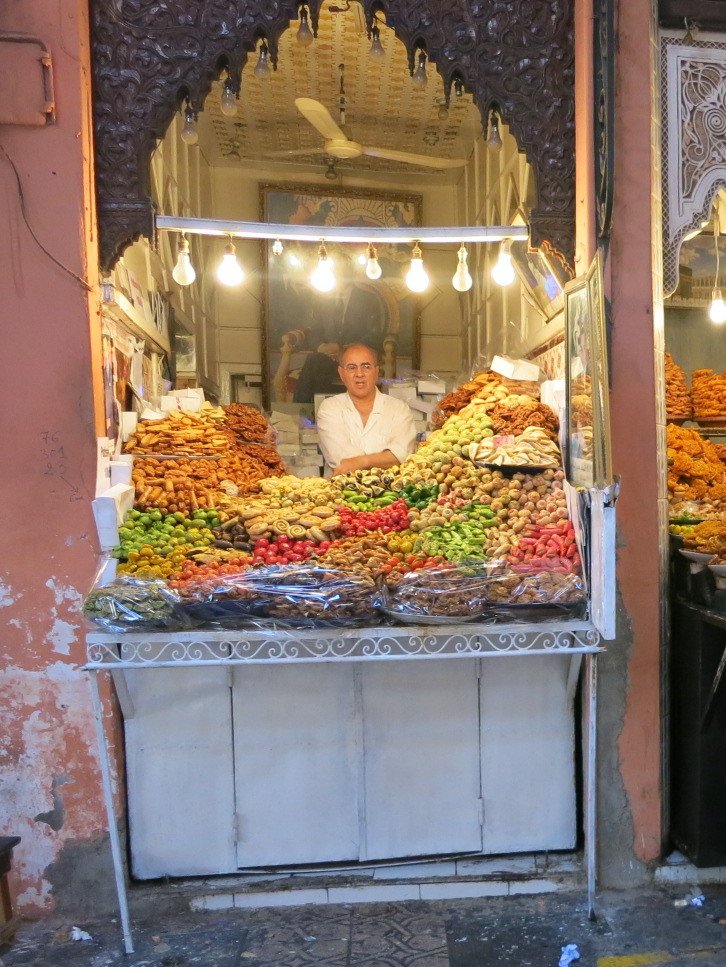 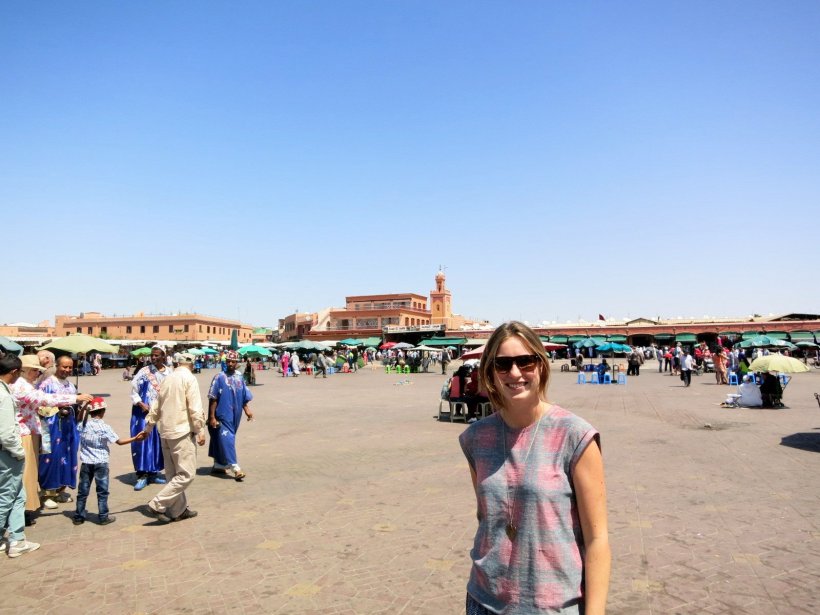 Marrakech, surprisingly, is quite flat and only has one major landmark to aim for. However, unsurprisingly, it is a mosque building which flies highest into the sky. We headed towards this tower like we were under its magnetic pull. Once close enough it was the venomous sun that caused us to run through the sprinklers in the adjoining garden. We marvelled at the tower, took our shots, realised we were already dry and ran through the sprinklers once again. 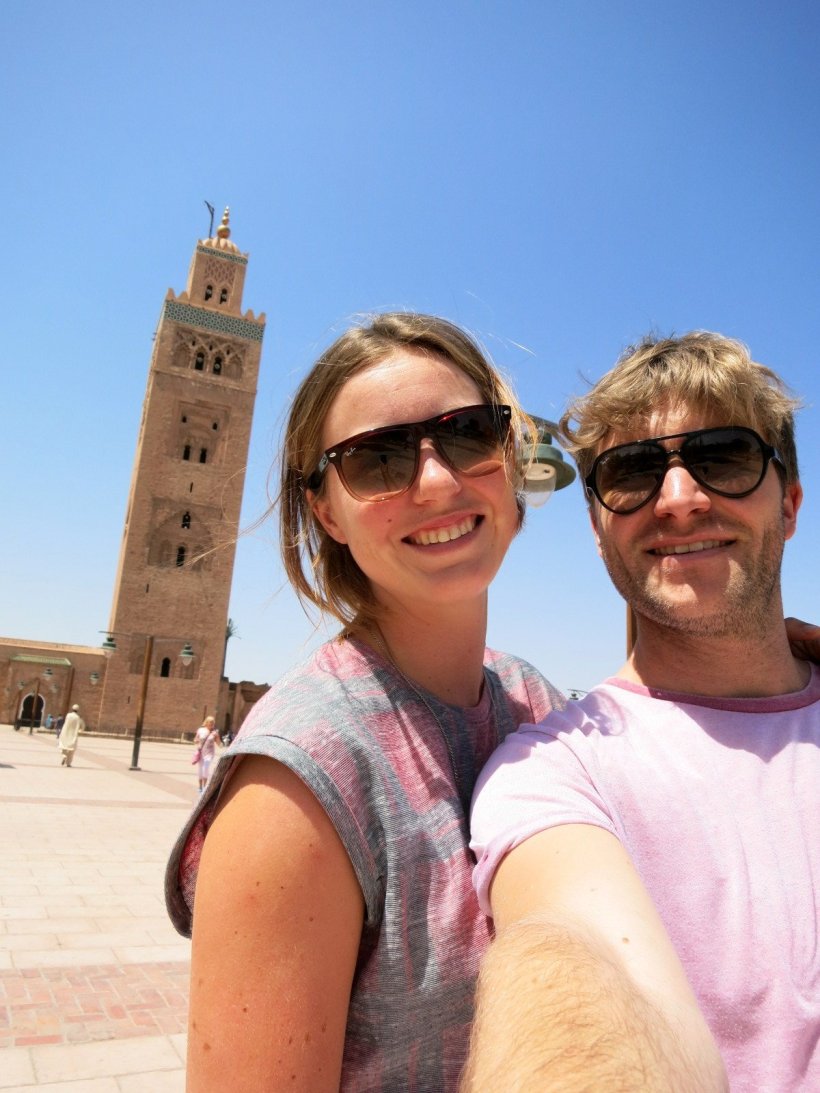 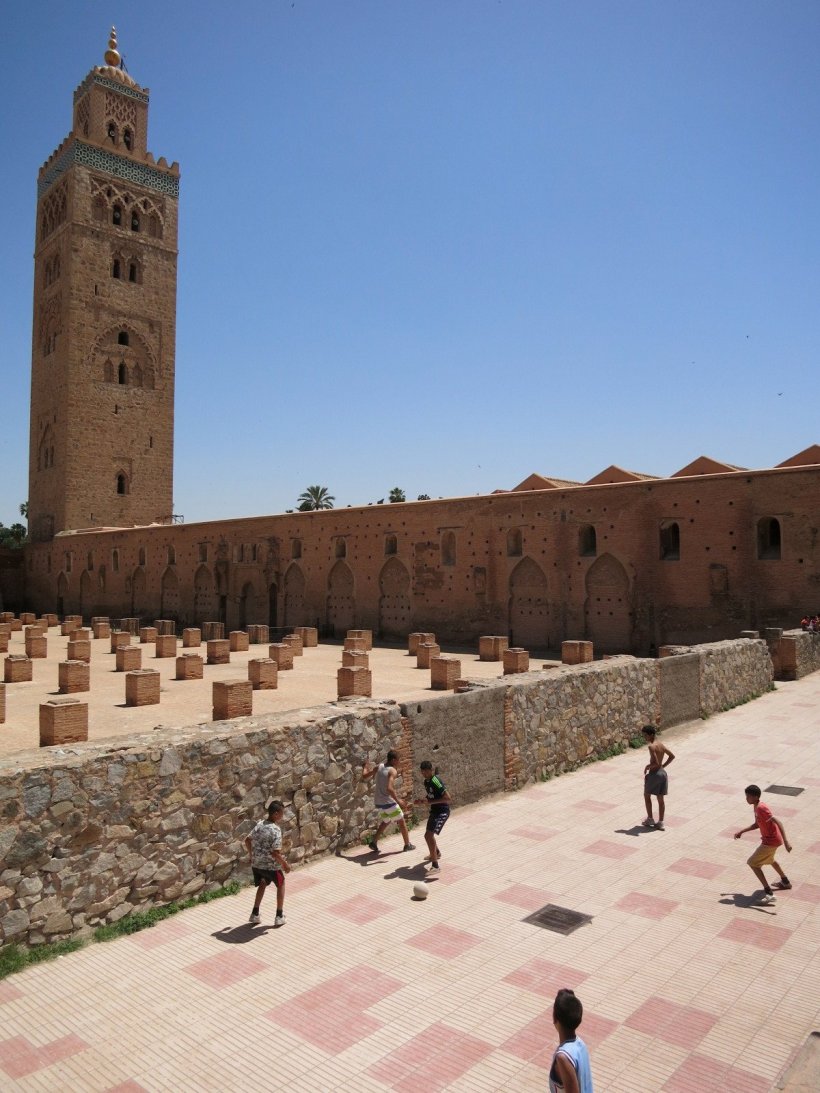 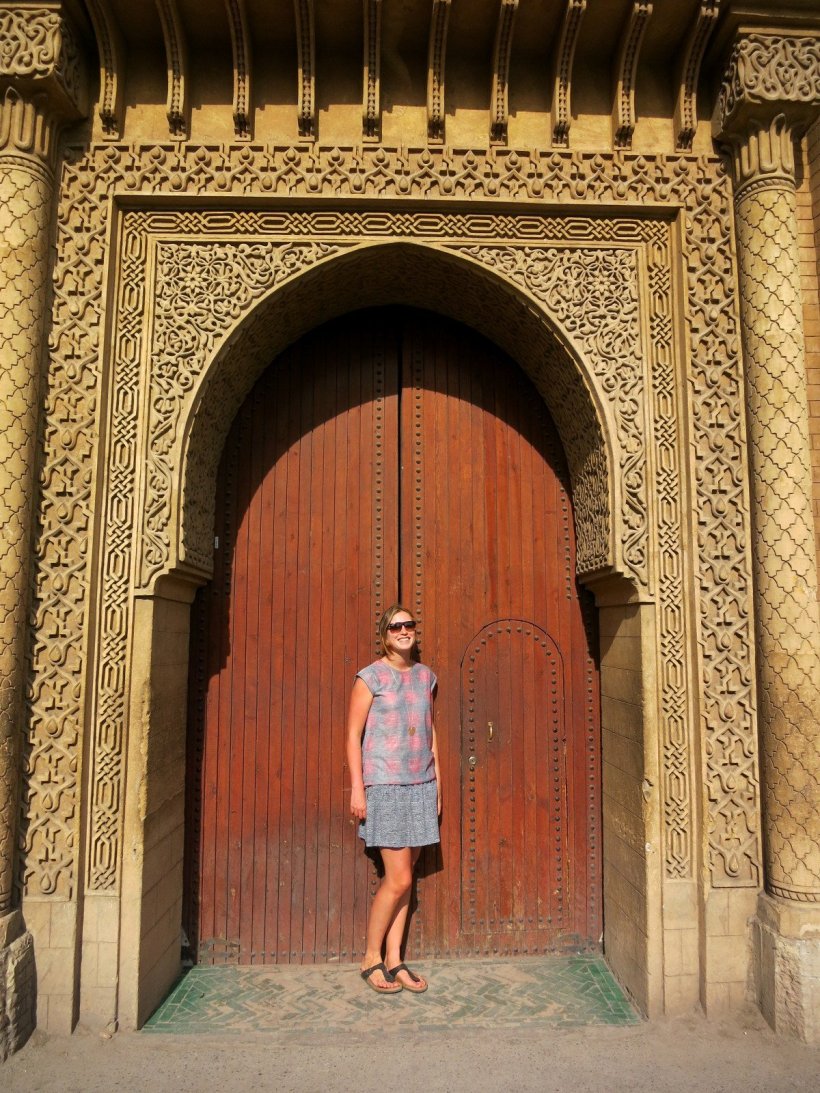 Suitably drenched, and drying far too quickly, we headed into the main hub of Marrakech – the Souk. This is the heartbeat of the city and is essentially one enormous market. It was like stumbling upon small cities within a larger city. There was the Tin making area, the rug making guys, the spice men (not girls), the painters, the fabric guys and so on. We were told the best way to explore the Souk is to throw away you map and just allow yourself to ‘get-lost’ and soak up what is around each bend. We eventually needed to stop to try and absorb all that our eyes had seen over some lunch. Again, the food was simply delicious. The venomous sun was biting even harder now and we decided to head back to our Riad for the antidote – a swim in an indoor pool. This refreshed us, we checked to see how Julian had rearranged our whole room (hilarious), and we recharged for a night out amongst the hustle and bustle once again. 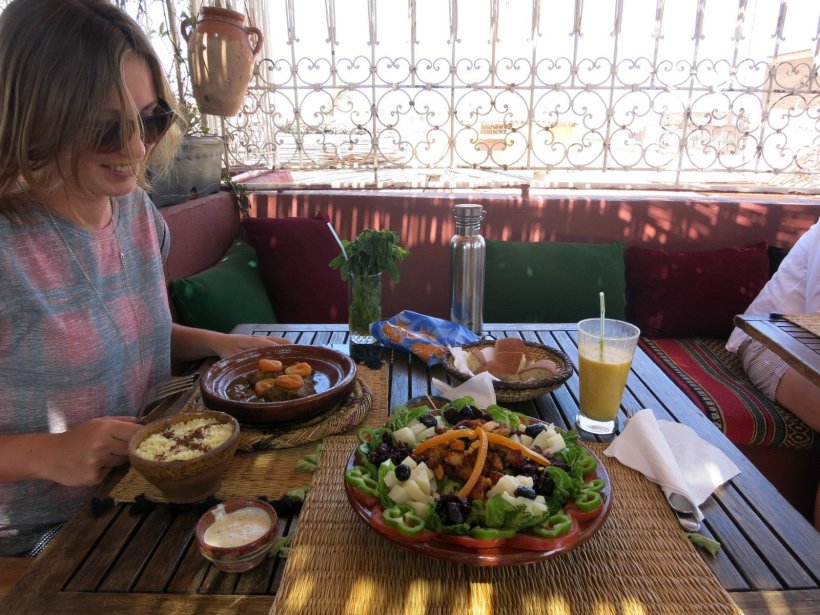 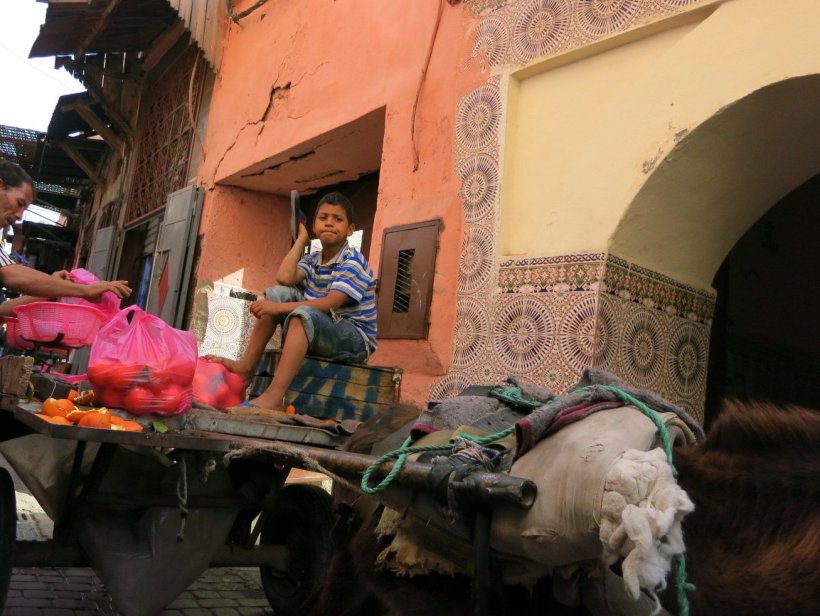 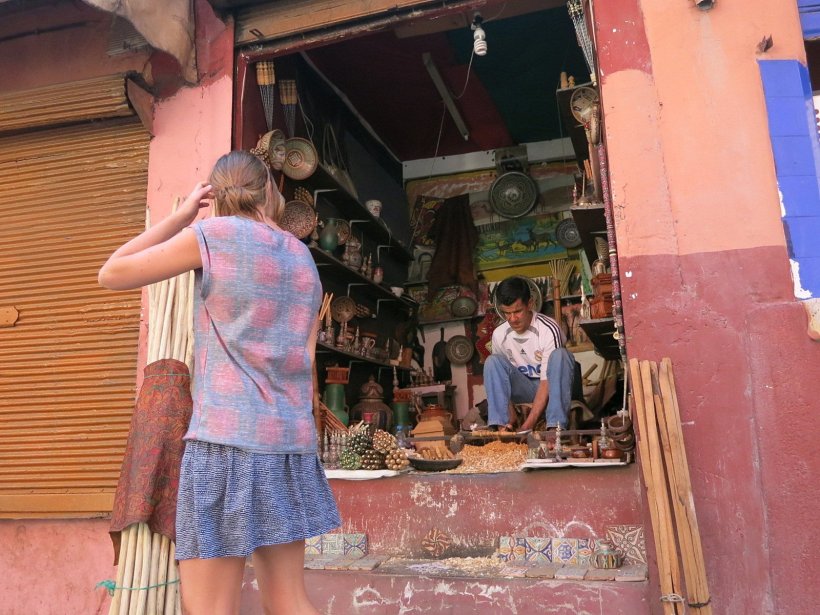 Night time seems to transform the city. At dusk a magical cape is draped over the city and the ‘night-dwellers’ emerge with a new set of tricks up their sleeve. The square was now heaving and the chaos of the day seemed like royal British organisation. All sane people seem to stay at home when the sun sets and the loonies come out to play, seemingly, they all bring an instrument with them to bash, clang, hit or strum. There is music everywhere! It is an eternal soundtrack of rhythm, all competing for attention and rising in volume until it is noticed. The best place to watch this is from above. We spotted a cafe up high, clambered our way to the top and sat from our vantage point simply pointing out moment after moment. It was like a Where’s Wally landscape had come to life and you were trying to pinpoint the most interesting bits amongst a mirage of colour.  The markets had their own heartbeat that could not be ignored. It was vigorous to say the least. Smoke rose up from the fire pits that cooked the unknown meats – the crowds couldn’t get enough of it. The most diverse range of foods was served up from pig’s heads to brains. Not your everyday market foods. The Moroccan’s certainly put their own spin on it. 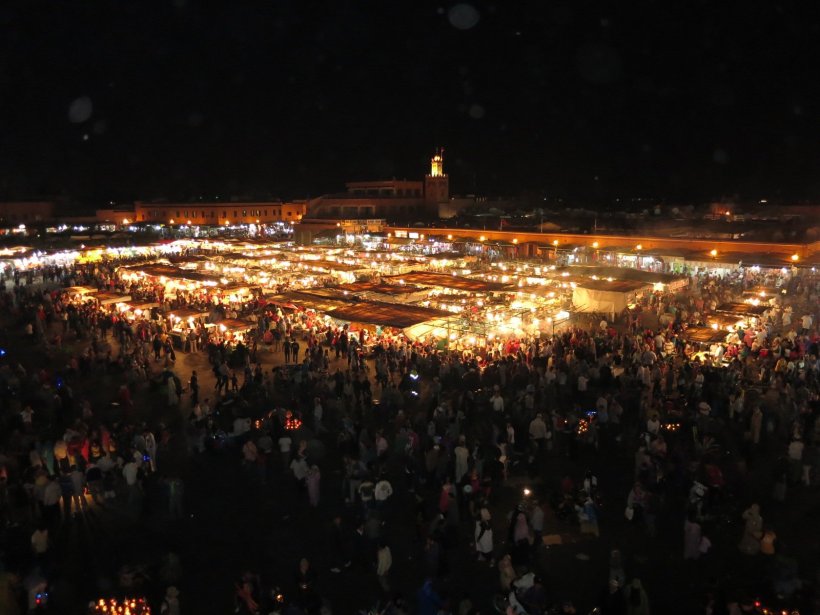 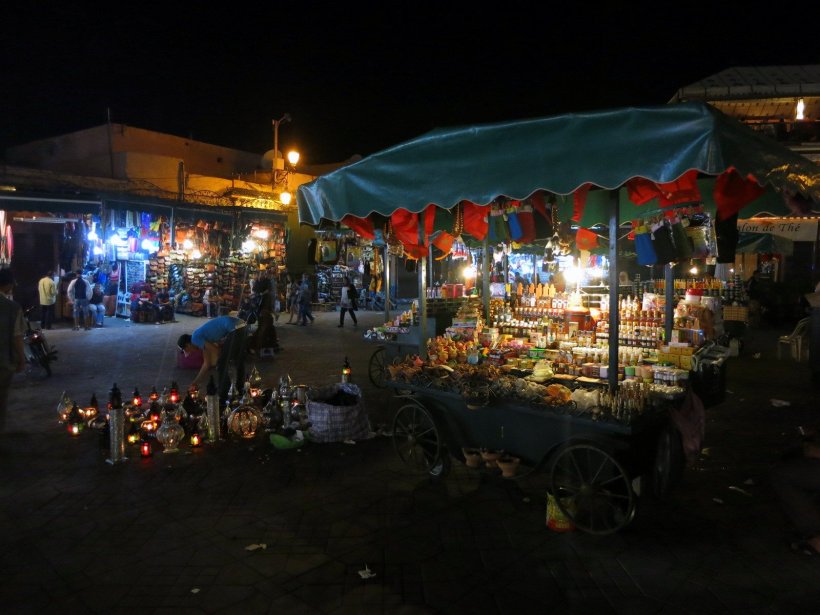 The night held one last unexpected treat – we became incredibly lost in the Souk once again in our attempt to navigate home. This was a fascinating diversion as you saw what the market streets looked like once the tourists had found sanctuary back in their Raid refuges. We lingered in this distraction and pretended (even for but a short while) that we were locals on our way home. 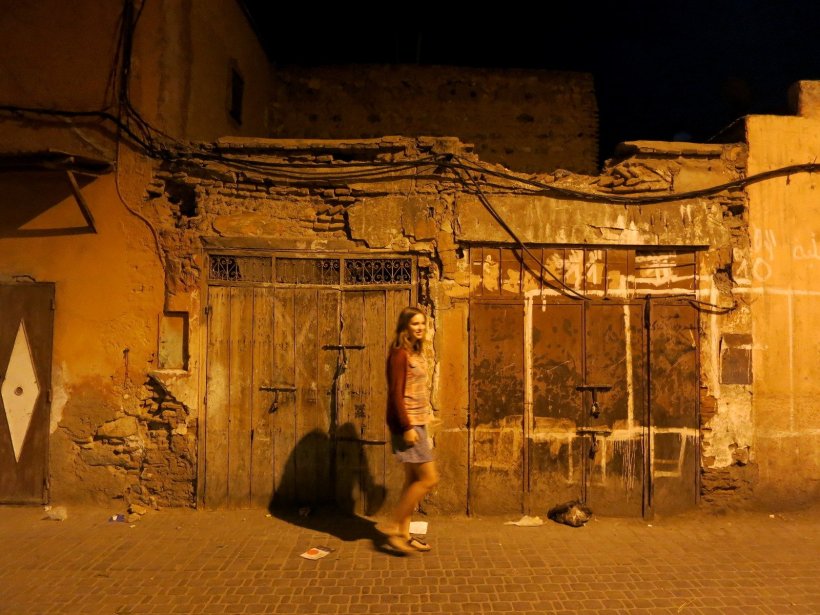 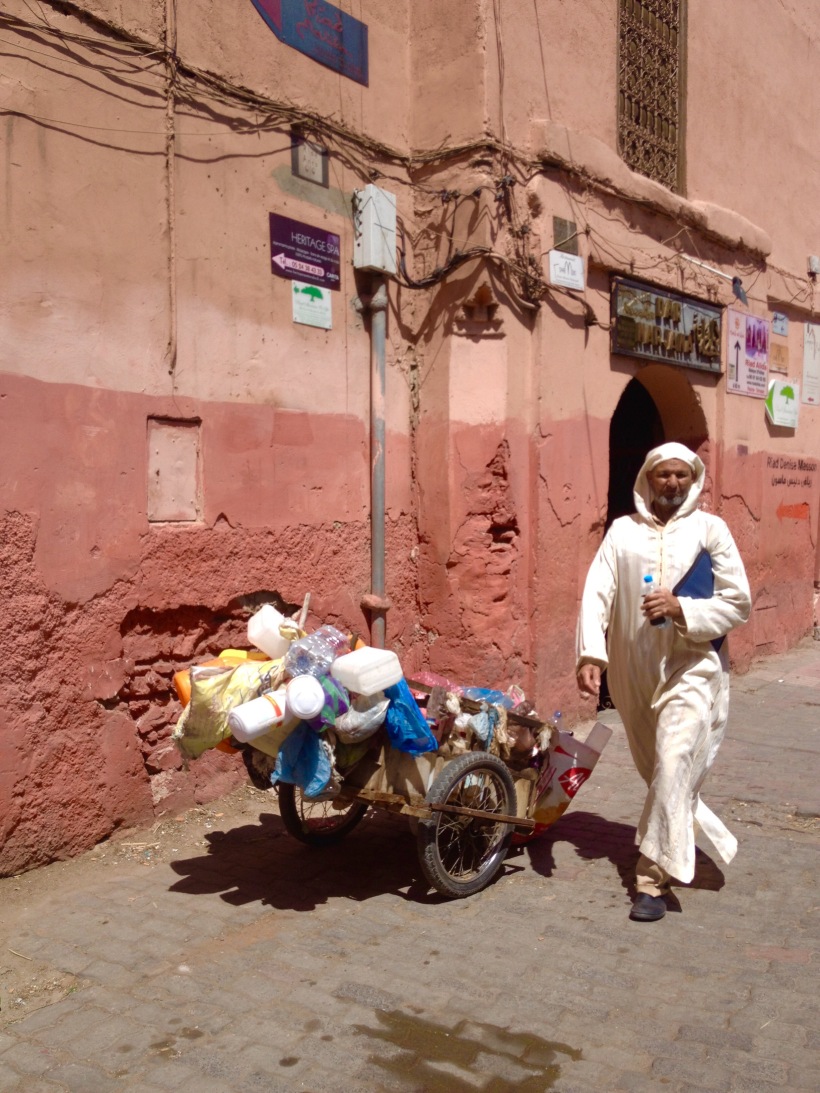