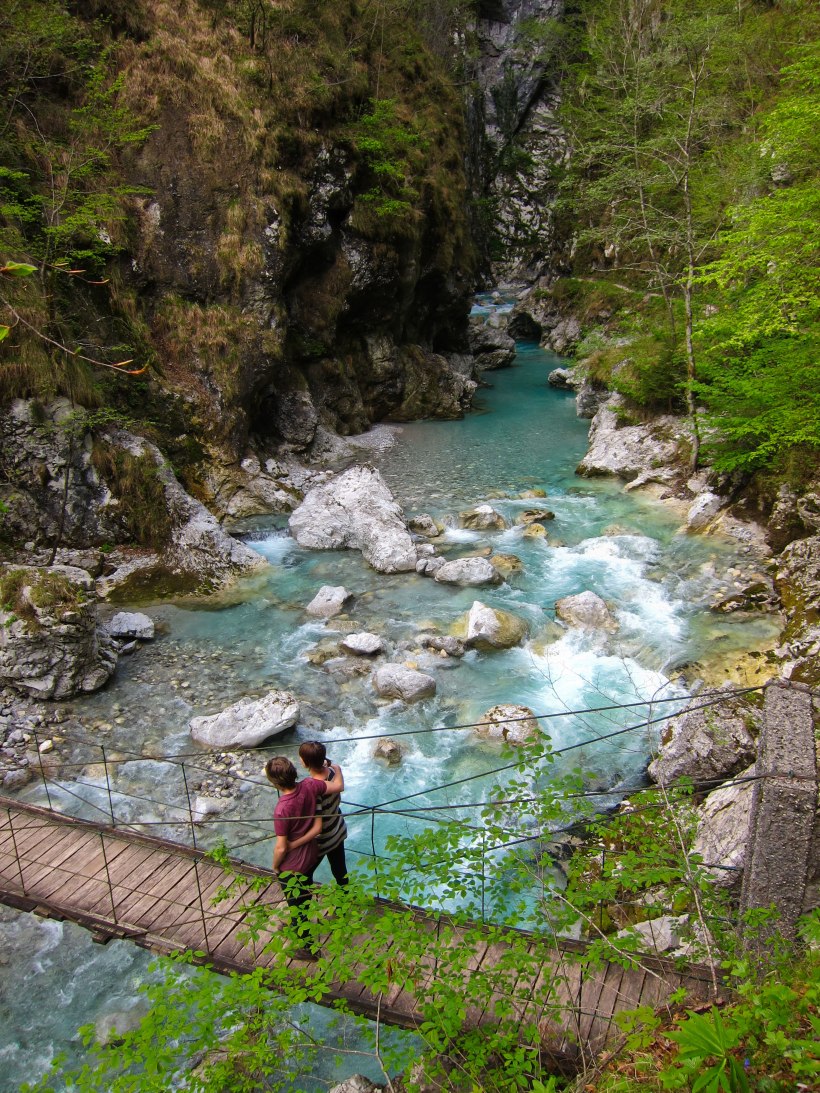 Sad as we were to be leaving our wooden hut in Ukanc and Lake Bohinj, the mighty Soča River was calling – and when it calls, you respond.

Before we reached the call of the Soča river, we stumbled upon an incredible find. Scattered all around the Soča region are open war museums. I like to call them ‘boy-museums’ as they don’t have any laborious placards of information, yet instead you are allowed to roam a space and experience what it would have been like for a soldier during the War. It is littered with secret underground tunnels, trenches, ditches, rusted metal pieces and it has even been rumoured that if you search for long enough you might just find a ‘shell casing’ from one of the guns used during warfare. It really brought home the reality of war and how close the combat was up in the hills. The trenches were all connected and at times Lauren, Susan and I would lose each other and have to call out to locate one another.

Now, you will never guess what they were mainly fighting over in this region? Yep, the mighty Soča river. The Soča valley was the stage of major military operations including the twelve battles of the Isonzo on the Italian front in World War I between May 1915 and November 1917, in which over 300,000 Austro-Hungarian and Italian soldiers lost their lives. At the top of this mountain pass you can see over into Italy as you are literally a stone’s throw away from the border. Everyone marvelled at the history that we had just experienced and collectively we decided to make a bee-line for what these countries were all fighting over.Down we wound, cut back after cut back. There is a town called Tolmin and just before reaching it you turn a bend and are hit with this blanket of emerald green water. It is one of the still water reservoirs that stems off from the Soča and shows off its glorious colour in spectacular fashion. This was a taster of what was to come – with a quick stop off, we ventured on to reach Bovec.

It is hard to recall who was more excited in the car of three adventurers. We were all competing for the title of ‘most excited’. Both Lauren and I were beside ourselves to introduce Susan to what we felt was our long-term and dearest friend natural friend, the Soča. Susan was likewise chomping at the bit to be introduced and call it friend. Twists and turns, small villages, beautiful mountains, unique farms, church spires and pine forests greeted our eyes on the drive, until…

Quick yet satisfying glimpses through the trees is all you capture to start with. Your eyes are drawn to the electric blue-green colour of the Soča. Each bend provides another opportunity and I needed to be careful that I at least had one eye firmly fixed on the windy road. Along the way we decided to try and swindle a quick visit into Tolmin Gorge. After almost not making it due to some very shoddy road-works we arrived at an abandoned car-park to find that we had free reign of this beautiful section of the Soča. I remember that to start with we were all just silent and memorised by the river; it’s power of surging water combined with the consistency of its beauty. At Tolmin Gorge we met a lovey local lady who gave us a hot tip to check out Kozjak waterfall before the sun retreated behind the mountains once more. What a tip it was. A beautiful board-walked section of the Soča that is tranquil and peaceful. It culminates to a centrepiece moment where the Soča roars through a cavern in the limestone rock and surges out a flurry of emerald-green water. We were pleased with this discovery. We were pleased with the Soča.

We retired to our stay for the night and surveyed maps and considered options for the next day. We decided on a hike along the Soča that also wound its way up the mountains through dense pine forests and finally cut through a few smaller Slovenian townships. Another magical day with our friend Soča. Literally around every bend the river captures your eyes. It’s like middle earth. All thoughts of being a ‘tourist’ dwindle away and it is just you and nature hanging out. Just beautiful. Inspiring. Rejuvenating. Tranquil. It will definitely be visited again.

Something like this is better to be remembered through your own eyes instead of just photographs. It is the smell of the pine, the sounds of the river, the glimpses through the trees, the panorama of the mountains that simply need to be experienced. Go and capture them with your eyes – your camera will serve simply as a reminder that you need to return in person.

The Soča is a unique part of the world and hard to describe. You are so torn as to what to do when you arrive back home. Every part of your being wants to tell others and show off the amazing scenery – but almost with a sub-clause that they won’t tell too many people! Long may it remain Europe’s best-kept secret!

Mackie....loved by not just her own kids, but her kid’s kids. Happy Mother’s Day @sooze3. Times like this I’m thankful our relationship does not just survive, but is able to thrive across the oceans xx
Found so many local treasures we otherwise never would have discovered #lockdown
It’s five years today and when I look at this picture I feel so many things. I feel the pain of you slipping through our fingers on that day and the sheer panic that we could never get you back. I am confused at why you are still gone. I laugh at your silly sock tan. I recognise the expression on your face like I only saw it yesterday and I sense the familiarity of the outline of your hands... but it starts to feel like a long time since I’ve felt them around me. I remember this day and how you were starting to find it hard to walk on the sand but you threw yourself in to it anyway, tripping frequently, because that’s what you did for your kids. You knew I wanted to walk on the beach after a long flight from London, and look how happy you made that walk. I feel so ripped off that you don’t even know River, Sonny and their cousins exist and it hurts so much that they missed out on your love. But, *I* didn’t miss out. And the overriding feeling of looking at this picture is the thankfulness that we loved one another fully. You were so selfless in your love. You easily could have suggested we moved home from London all those years ago when you were becoming more unwell, but you didn’t. That’s how much you loved me. Now that I have kids it is hard to imagine the personal cost it took for you to release me. You aren’t here daddy, but you are always teaching me and I suspect you always will xx
☀️ 2 years of Sunshine ☀️
Child of the wind, how I love you
Half term... you were much wetter than I wanted you to be! 🌧 💦
You take us on the wildest adventures, and we aren’t complaining! Happy birthday, my love @joelwardle x
Always leading us @joelwardle. Thank you x
Who would have thought that puddles were the epitome of brotherly bonding 💦
The only thing better than having you as my mum, is my boys having you as their Mackie. Love you mum xx
Killing me with his cuteness these days (Joel, that is 😉)
Always collecting 🌾🌱🌻 I never regret walking slowly, yet I often regret walking too fast. Funny that...